Omnibus Legacy bill passed by House, off to the Senate 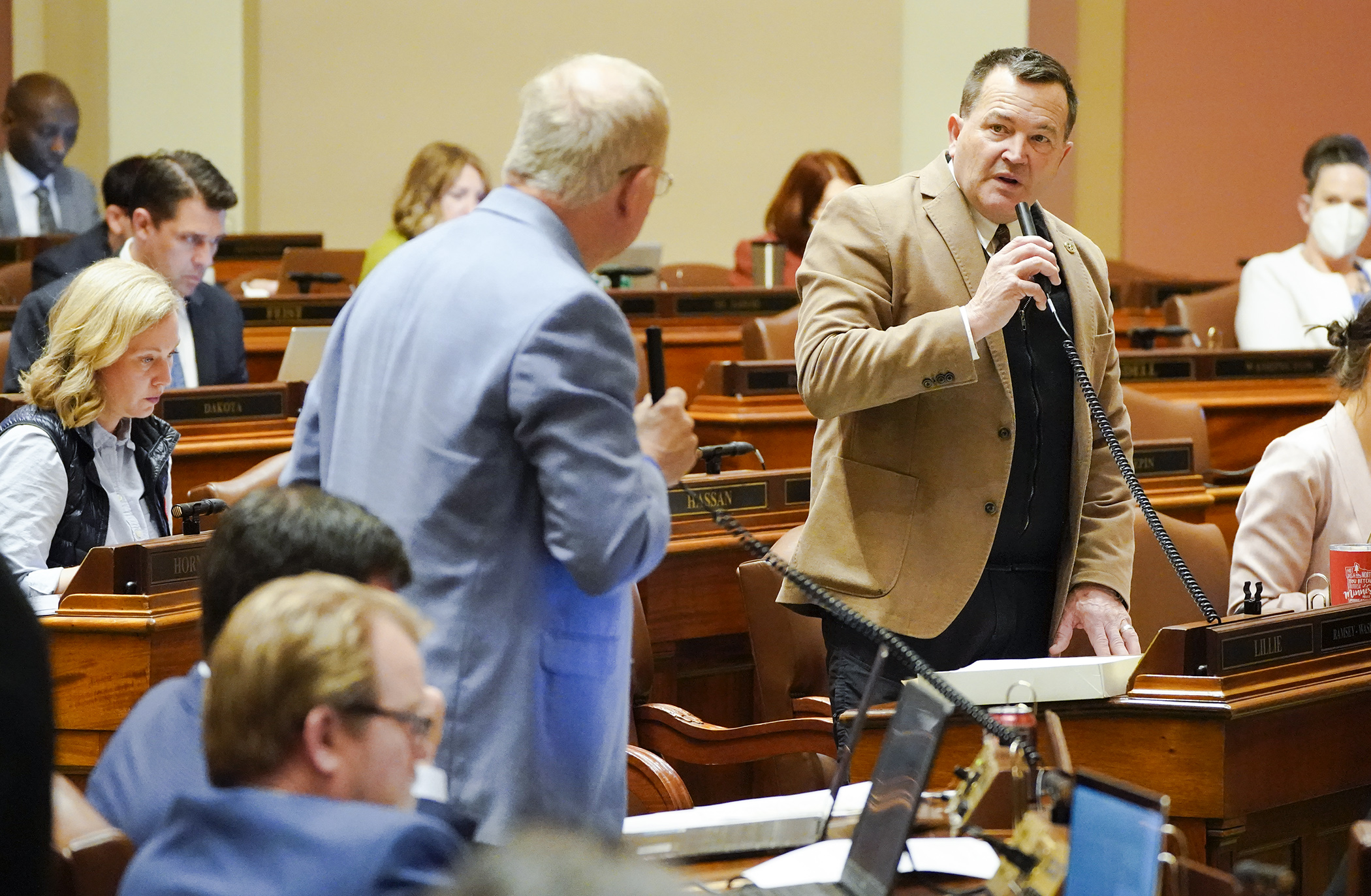 Rep. Leon Lillie, chair of the House Legacy Finance Committee, answers a question from Rep. Dean Urdahl during debate on the omnibus Legacy finance bill April 25. The bill passed on a 70-62 vote. (Photo by Paul Battaglia)

The projected budget surplus isn’t the only thing that grew during the past year’s unexpected economic recovery. So did sales tax revenue in the state. And that means that the Legacy funds have grown, as well.

That’s because Minnesota voters approved the “Legacy amendment” in 2008, asking that state sales taxes be increased 0.375% with the money earmarked for the outdoors, clean water, parks and trails, and arts and cultural heritage. While most of the funds were divvied up between various projects in 2022, additional monies that came in inspired something of a supplemental Legacy bill.

Sponsored by Rep. Leon Lillie (DFL-North St. Paul), that omnibus Legacy finance bill, HF3438, was passed 70-62 by the House Monday. It now heads to the Senate, where its companion contains only the $159 million in appropriations from the Outdoor Heritage Fund. SF3701, sponsored by Sen. Carrie Ruud (R-Breezy Point), awaits action by the Senate Finance Committee.

“Minnesota’s lucky to have this amendment out doing good work,” Lillie said.

The bill would allocate $225 million in fiscal year 2023 from the four funds that receive their monies via the Legacy Amendment. That amendment to Minnesota’s constitution stipulates that 0.375% of state sales taxes be divvied up thus: 33% to the Outdoor Heritage Fund, 33% to the Clean Water Fund, 19.75% to the Arts and Cultural Heritage Fund, and 14.25% to the Parks and Trails Fund.

The majority of the proposed funding would be $159 million from the Outdoor Heritage Fund, per the recommendation of the Lessard-Sams Outdoor Heritage Council. But it would also allocate $47.4 million from the Clean Water Fund to 14 particular projects, most dealing with either grants for lead water service line replacement or the Conservation Reserve Enhancement Program.

The improved February budget forecast also inspired the House Legacy Finance Committee to increase funding to the projects approved last session, adding $12.1 million from the Arts and Cultural Heritage Fund and $6.5 million from the Parks and Trails Fund.

“We thought it would be a shame to leave these funds on the bottom line,” Lillie said. “We still have a robust reserve.”

A controversy that persists from past years is the amount of land being acquired by the state, a point raised by both Green and Rep. Steve Drazkowski (R-Mazeppa).

Rep. Josh Heintzeman (R-Nisswa), a member of the Clean Water Council, objected that the projects under the Clean Water Fund hadn’t been sufficiently vetted by that council. But Rep. Sydney Jordan (DFL-Mpls) spoke in favor of the bill’s clean water provisions.

“Passing this bill allows us to monitor PFAS,” Jordan said. “And lead service lines are one of the biggest sources of lead in Minnesota’s drinking water. We allocate over $15 million to replace the privately owned portions of lead service lines while we’re replacing the public portions. Microplastics are not only present in our bodies of water but in our human bodies, as well. We want water that’s free of PFAS, lead and plastic.”