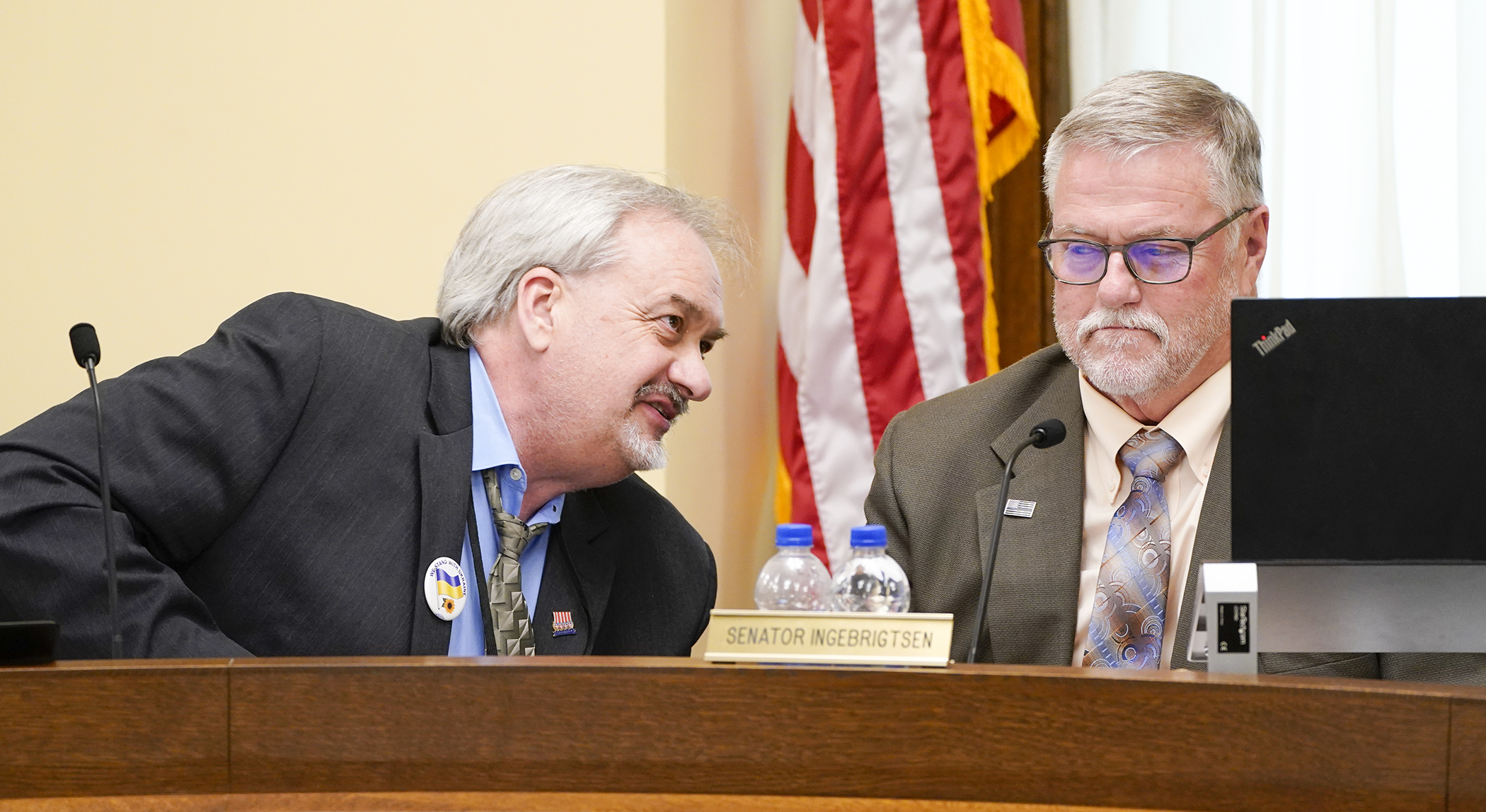 Rep. Rick Hansen, left, and Sen. Bill Ingebrigtsen confer May 9 during the first meeting of the conference committee on HF4492/SF4062*, the omnibus environment, natural resources, and tourism bill. (Photo by Paul Battaglia)

With more than $240 million in appropriations and several statutory changes to be reconciled, a conference committee started work on the state’s omnibus environment and natural resources supplemental finance and policy bill.

The House version of the bill is looking to spend some of the state’s surplus — $249.6 million worth in fiscal year 2023 — while the Senate only looks to spend a modest $8.44 million while focusing on many new policies.

The result is a $241.2 million difference in the two versions. The 10-member conference committee, led by chairs Rep. Rick Hansen (DFL-South St. Paul) and Sen. Bill Ingebrigtsen (R-Alexandria), received a walkthrough of the similarities and differences of HF4492/SF4062* Monday.

“I know that the gulf is wide and deep between us in the amount of money,” Hansen said. “But I’m hoping there are some things that we can come together on.”

Indeed, before the meeting adjourned, the committee unanimously approved an Ingebrigtsen motion to adopt all provisions that are identical in the policy sections of the two bills, and to accept the House language on those that are similar.

The largest appropriations in the Senate bill for fiscal year 2023 are $1.6 million to the DNR for land acquisition (which is also in the House bill); $1.5 million from the Pollution Control Agency Remediation Fund to clean up a school that will be destroyed in Lake of the Woods County; and $1 million to Explore Minnesota Tourism for large scale events promotion.

The House appropriations and policy changes would also create a Minnesota Outdoor Recreation Office, which is not included in the Senate version. The bill would fund the office with $1.7 million in fiscal year 2023 from the General Fund, with an additional $500,000 in the next biennium.

Proposed provisions included in both versions but have differences include:

Some of the major House provisions that are not included in the Senate bill would:

Side-by-side comparisons of the bill can be found here, here and here.

“With the disparity of our two bills, how do we resolve such a substantive difference?” asked Sen. Bill Weber (R-Luverne).

“Well, I’m not sure,” Ingebrigtsen replied. “We’re a long ways off; we really are. There’s a lot of spending here I’ve never seen before. There’s a real difference about what we should do with those dollars. And it is a non-budget year.”

The commissioners of the Department of Natural Resources and the Pollution Control Agency testified, as did the executive director of Board of Water and Soil Resources. All agreed on the need for approving new funding this year, particularly in order to unlock federal funds that otherwise wouldn’t come to the state.