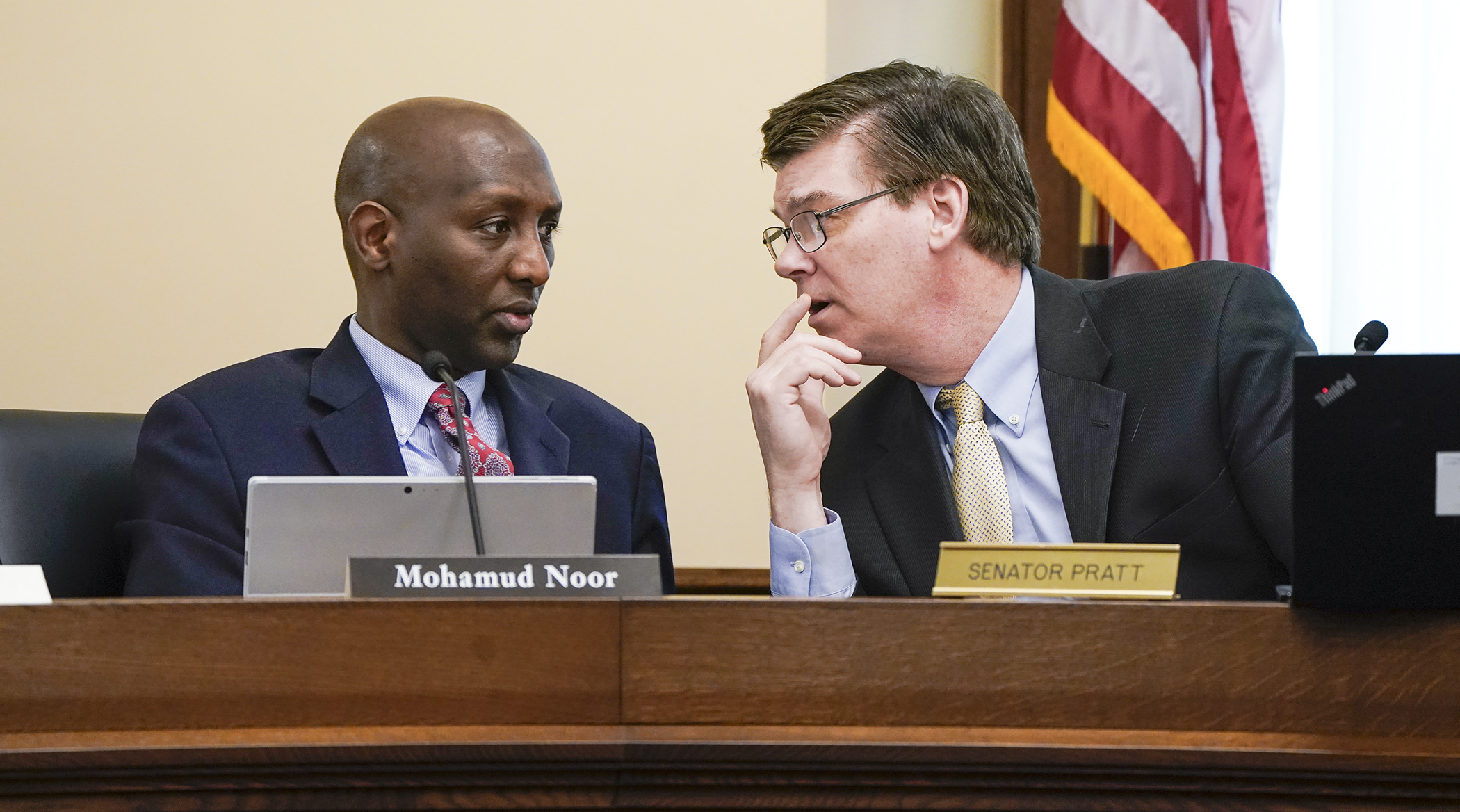 Rep. Mohamud Noor and Sen. Eric Pratt confer during the first meeting of the omnibus jobs, energy and commerce policy and supplemental appropriations conference committee May 12. (Photo by Paul Battaglia)

When the House and Senate agreed to combine four omnibus bills into one, the funding gap in the resultant legislation grew and grew.

Few conference committees are entrusted with bridging a more expansive canyon in funding priorities than the one negotiating the differences between the omnibus jobs, energy and commerce bills. HF4355/SF4091*, sponsored by Rep. Mohamud Noor (DFL-Mpls) and Sen. Eric Pratt (R-Prior Lake), has $524.5 million worth of difference in supplemental appropriations for the current biennium between the House and Senate versions.

On Thursday, the conference committee held its first meeting, where nonpartisan staff walked through the many differences and few similarities between the two bills. The House bill contains $537.7 million in appropriations for the current biennium in the four areas within their bill’s bailiwick, compared to $13.2 million in the Senate bill.

Of the House appropriations, $161.7 million would establish a fund for school districts to pay unemployment benefits to hourly school workers such as bus drivers. The House bill also includes:

Tuesday, the Senate passed a bill that would allow private insurance companies to offer paid family leave to businesses.

For the current biennium, the House would appropriate approximately 10 times more funding in the areas of energy and climate change mitigation than would the Senate: $120.2 million in the House bill, $12.7 million in the Senate bill, which is, by far, the Senate’s largest outlay in any of the bill’s four subject areas.

Some programs are funded in both bills, but at different levels. The Senate would put $4.1 million toward the Solar for Schools program, compared to $3 million in the House bill, and would apportion $3.5 million of the Renewable Development Account to community energy transition grants, while the House bill has $2 million in General Fund spending for that purpose.

Appropriations that passed the House, but aren’t in the Senate bill include:

Both bills have a solar energy production incentive program, while the House bill also includes a storage rewards program modeled after it.

Among the items funded in the House bill, but absent from the Senate bill are:

The House version would bar social media companies from using algorithms to target content to children; set up a student loan advocate to review complaints from borrowers and create a student loan education course; and prohibit the purchase of used catalytic converters by anyone other than registered scrap metal dealers.